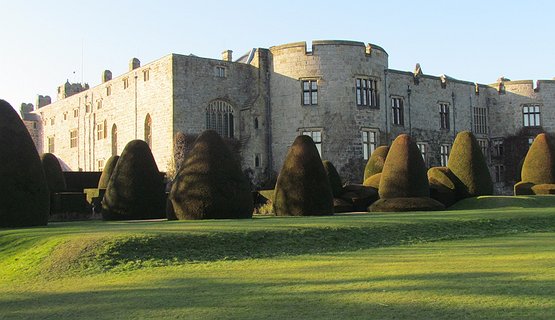 Wales has more castles than any other country in Europe – which include those of the medieval Welsh princes, the English kings and the rich Victorian landowners. On this tour explore three fascinating castles in North East Wales, and also see several other castles in the area, such as Castell Dinas Bran and Denbigh Castle.

• Explore Bodelwyddan Castle, transformed into a magnificent example of 19th century Gothic architecture, now home to pictures from the National Portrait Gallery from the Victorian era. Optional highlights guided tour included. Stroll in the formal walled gardens, including a maze, or walk into the parkland to see the First World War practice trenches.

• Have lunch in the beautiful sandstone 4 star Ruthin Castle Hotel, where Edward VII was entertained by one of his mistresses, Patsy Cornwallis-West. Walk around the grounds to see peacocks and remains of the medieval castle, with its dungeons, drowning pool and whipping pit. Optional highlights guided tour in grounds included.

Please note that only the guiding fee is quoted. All you need to do is provide the coach or minibus with a working microphone.

Lunch can be provided for groups at a very reasonable cost if booked in advance at Ruthin Castle Hotel or afternoon tea with a selection of home-made sandwiches, home-made pastries and coffee/tea.

Admission to castles is not included within the cost, but can be arranged at group rate. National Trust members admitted free to Chirk Castle, only on production of current valid membership card.
Please note that Bodelwyddan Castle is not open every day so tours can only take place on certain days

Live the Legends - Agincourt, Henry V & Wales Tour Monmouthshire and the Brecon Beacons, tracing the Life of Henry V from birth to warrior King. Read More
Castles through the Ages Wales has a greater density of Castles than any other country, but not all castles are the same! Read More
Conwy Castle & Medieval Town So much to see and so much to do in Conwy - a must see for anyone coming to Wales. Read More
Caernarfon Castle & Medieval Town A World Heritage Site and a must see, built by warrior King of England Edward 1 in 1283. Read More
Scientists, Secrets & Spies of WWII Discover why our most top secret project of WWII happened in a tiny North Wales village. Read More
Agincourt; Band of brothers A day in wonderful Monmouthshire and Powis- legend and real life Read More
Castles of Contrast Enjoy two different castle, but equally as dramatic. Read More
The Romans in Wales Visit the HQ of the Romans in Wales who ruled here for 200 years. Read More