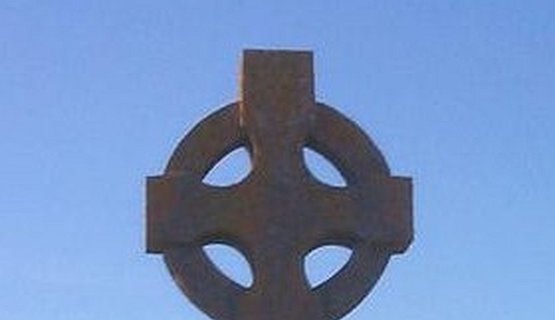 Our journey starts at St. Winefride’s Well. After seeing that and the neighboring abbey, we set off travelling Westwards in the footsteps of the medieval (and modern) pilgrims. We'll call in on a variety of holy sites from an acient celtic cross, to medieval churches and holywells. We finish with a view of special Bardsey Island the destination of so many early pilgrims. -

According to legend, Winefride/Gwenfrewi broke off her engagement to the chieftain, Caradog to become a nun. Caradog became so enraged that he cut off her head. A healing spring is said to have appeared where the head fell. Next we travel westwards to St Asaph Cathedral, the smallest ancient Cathedral in Britain.and then on to Llansannan, then the pretty village of Gwytherin Legend has it that St Winefride became the Abbess of a monastery in this village after St Beuno, her uncle, restored her to life.

Next another pretty Welsh village of  Llangernyw to St. Digain’s Church to see two early stones, crudely inscribed with crosses and the oldest known living tree in Wales.

We overnight in Caernarfon with an option to visit the world heritage castle, before continuing in the footsteps of the pilgrims down the Llŷn Peninsular calling at more gorgeous churches including St. Beuno’s Church Clynnog Fawr, which is the site of an early Christian monastery and was an important church on the trail. St. Beuno was Winifride’s uncle.  In the south side of the church is a rough boulder inscribed with a cross. We'll see Beuno’s Holy Well and learn of the legends associated with this holy man.

We finish at 'The Cathedral of Llŷn’ in beautiful Aberdaron where, in the 6th century St Hywyn, established the first monastic settlement here. The site was an important stop along the pilgrim route to Bardsey Island and records show that it shared a close association with St Mary's Abbey on the island founded around the same time by St Cadfan .The acclaimed poet RS Thomas was vicar here from 1967 to 1978.

Lastly we'll drive up to  Uwchmynydd  eating at  Y Gegin Fawr where pilgrims rested before crossing to the holy island of Bardsey. Legend has it that this small and tranquil island is the burial site 20,000 Welsh Saints!

This tour price includes two days guiding but does not include cost of coach meals or overnight accommodation. Speakers and a boat trip to Bardsey can be arranged. Don't hesitate to call me to discuss 07876 241160 walesguide@gmail.com

Legends of Sacred Places in North Wales Legends of ancient and beautiful sacred places of North Wales Read More
In the steps of St David listen to tales of St David along the cliffs and coves, finishing with special Cathedral tour Read More
Pilgrims journey a pilgrim’s journey across the magnificent, sacred landscape of North Pembrokeshire. Read More
Saints, bishops and pilgrims Many secrets to discover as we follow a timeline of the rich history of Llawhaden through the ages. Read More
Celtic trail in the Vale of Clwyd Footsteps of the Celtic siants Read More
St Davids Cathedral Visit the home of the Patron Saint of Wales and have guided tour of the Cathedral. Read More